SSE Airtricity launched their #PowerOfGreen campaign to announce that Airtricity is Ireland’s largest provider of 100% green energy. The #PowerOf Green concept is that there is a collective energy we have as Irish people that is unique and we have an ability to use that energy to pull together for a greater good. The call to action for the campaign was to join in the movement to make Ireland a greener place by switching energy suppliers to Airtricity.

For SSE Airtricity we delivered a light-hearted content campaign that celebrated the best things about being Irish. The emphasis was on engagement with the #PowerOfGreen concept, each piece focused on a particular aspect of what it means to our users to be Irish or to live in Ireland.

Six native pieces pinned in 5th position ran over 10 weeks and the campaign culminated in a sponsored magazine which bundled the content. The campaign was especially strong for utilising a variety of formats within each native piece. We included straight articles, a vox pop video, a poll, and interviews with well-known Irish people who have represented Ireland on the international stage

In every piece, users were encouraged to engage with the message through the comments and through social. Average time on page was well above average as users responded strongly to the different native formats. 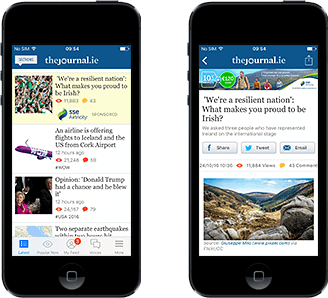 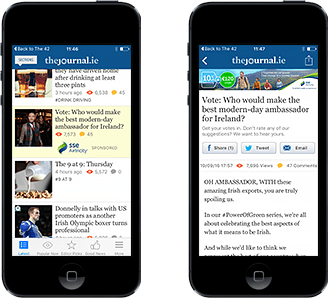