The key message for the client was that the Nissan LEAF electric car is environmentally friendly and saves money while also offering the same performance as a conventional car.

We ran a 5 week campaign comprising four connected elements: a series of Native Ads addressing anxieties and misconceptions about electric cars; a media first bespoke Power Saving Switch button operating on desktop and in-app, communicating the power saving features of the LEAF; a native video, the first produced by the Journal,

where we filmed Journal readers getting lifts around Dublin in a Nissan LEAF; and display ads running over the period to drive the overall campaign.

The Power Saving Switch button, designed and coded especially for the campaign, was live for 2 weeks within the period and acted as a disruptive, clever and highly effective media first.

Interaction with the switch allowed the user to turns screens on desktop and in-app to energy saving mode.

Results were excellent with high interaction rates on the eye-catching Power Saving Switch and higher than average views on the native ads. Display ads drove interest and we saw an incremental increase in the articles as the campaign rolled out. The final article generated the highest ever article views recorded on the Journal thus far!

View one of the ads live here: http://www.thejournal.ie/battery-myths-nissan-leaf-charging-electric-car-1739413-Nov2014/ 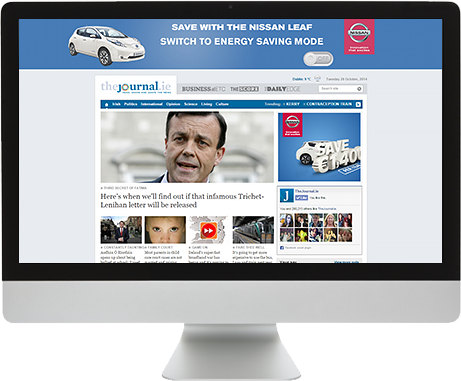 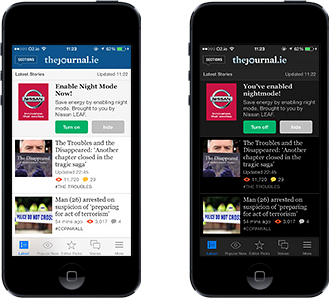 Power Switch on Mobile before and after 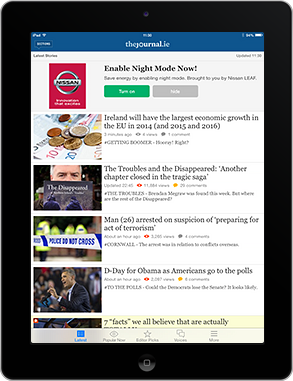 Power switch on iPad before 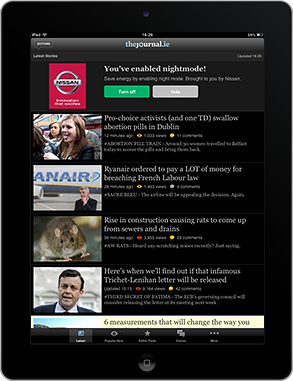 Power switch on iPad after