The 2014 World Cup in Brazil ran from June 9th until July 13th. Soccer has a huge following in Ireland and our soccer vertical is well known for its consistently high quality content. As much as we all love to read about and watch soccer, we recognised that there is a huge appetite among soccer fans for talking about the game – soccer fans are passionate in their opinions and relish opportunities to engage with each other on all soccer related topics!

With this in mind we developed our concept of “World Cup Hangouts”. The hangouts were live and interactive online conversations that ran for two hours at a time on World Cup match days. They were strong with multimedia elements and featured photos, gifs, video and vines to add colour to the conversation.

Budweiser recognised this opportunity to leverage fan’s excitement about the World Cup. They aligned their brand with a total of 26 hangouts from the group stages of the tournament right through to the final. 15 of the hangouts were hosted by our sports journalists, 5 were hosted live from our “man on the ground” in Brazil and 5 were hosted by personality guest hosts, - Andy Lee, Ken Doherty, Karl Spain, Jarlath Regan and Paddy McKenna.

Weekly competitions were run in conjunction with the hangouts. Prizes of tablets and smartphones were given for best tweet, question, comment or vine so that engagement was the key driver for entries.

Article views and social interactions were consistently high for all the hangouts and the success of the content campaign was augmented with targeted high impact display formats to connect strongly with the Budweiser brand. 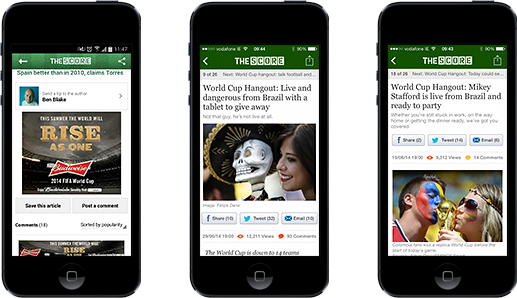 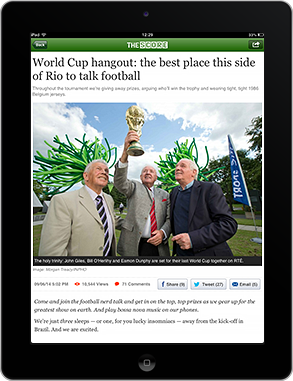 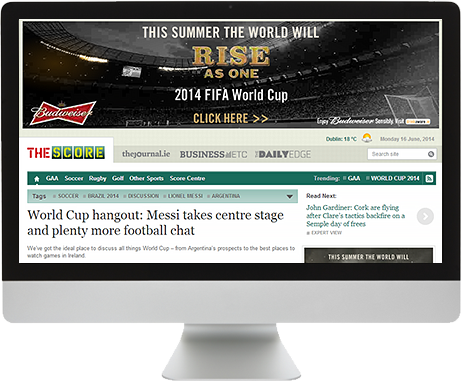 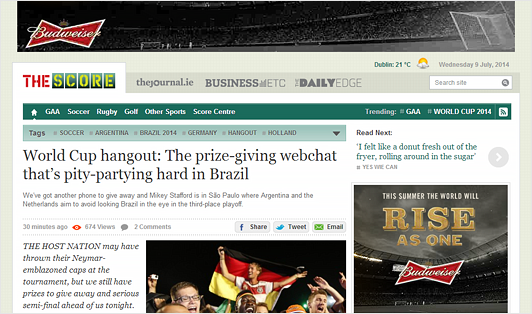